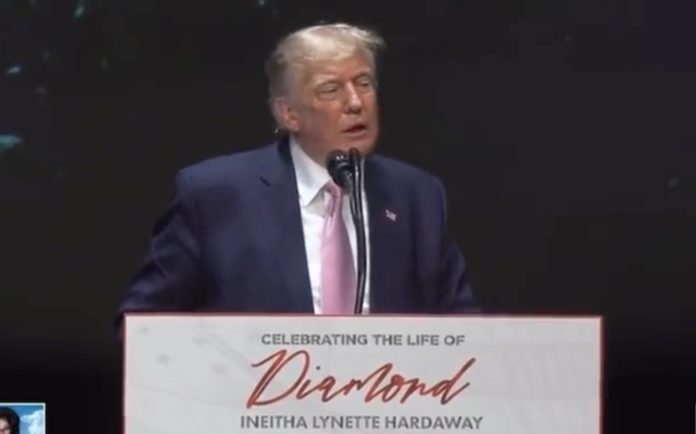 
At a memorial service for Lynette “Diamond” Hardaway in North Carolina, former President Donald Trump spoke among Republicans, praising Diamond as one of the world’s “biggest stars.” However, he also mentioned that he did not have a personal relationship with Rochelle “Silk” Richardson, the other half of the conservative duo “Diamond and Silk.”

“The world has lost one of its brightest stars but I see that we have another star who was equal to but she stepped up and she is different,” Trump said. ‘I’m serious. I thought I knew them both, I didn’t, I knew Diamond, but I didn’t know Silk at all. I just learned about Silk. You’re fantastic, you’re going to carry on beyond, beyond anybody’s wildest imaginations.”

Richardson spoke before Trump and praised Trump’s relationship with her and her sister, claiming he treated them like his own children.

7 People Dead In Shootings In Half Moon Bay, California: Reports

An inmate goes on a rampage when he suspects police officers lost his money. Officers have a tough time with END_OF_DOCUMENT_TOKEN_TO_BE_REPLACED

Andrew Tate and his brother, Tristan, are still being detained by Romanian authorities as they conduct their investigation into allegations END_OF_DOCUMENT_TOKEN_TO_BE_REPLACED

Prosecutors motioned the court to allow key testimony from witnesses who may have knowledge of Alex Murdaugh’s past crimes. The END_OF_DOCUMENT_TOKEN_TO_BE_REPLACED