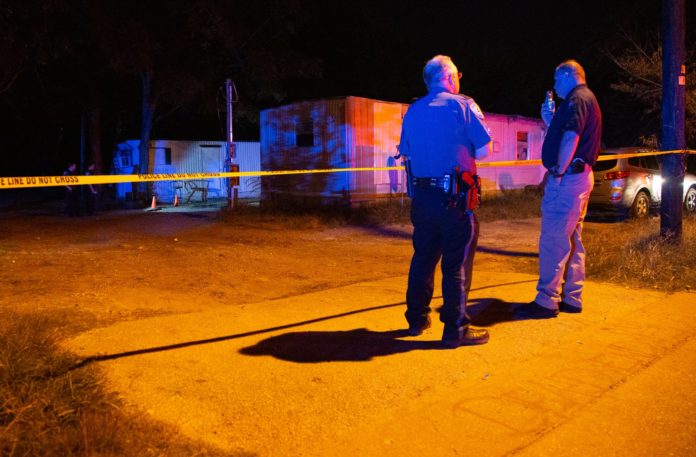 Officers were called to a pair of mobile homes in the 900 block of North Chestnut Street just before midnight after Cravo used the butt of a 9mm carbine rifle to beat a man and rob him of a cellphone, wallet, and keys.

Before officers arrived on the scene, Cravo entered the back mobile home and held two men hostage. He assaulted one of the men, causing severe facial injuries. The hostages told officers that they did not know Cravo and that the home did not belong to him.

Officers spoke with the first victim for 10 minutes before he directed them to the mobile home on the backside of the property as a possible suspect location.
Officers found the front door of the mobile home to be open but draped with a sheet. An officer knocked on the open door and one of the men being held hostage said “Come in, come in.” The officer responded with “Come out and talk to me please.” Seconds later, Cravo emerged with a rifle still in his hands.

Upon seeing the uniformed officer, Cravo raised the gun as if to shoot the officer.

That is when the officer fired his duty pistol, striking Cravo.

Cravo was taken by ambulance to a helipad and flown to an out-of-town hospital where he later died.

The first victim refused medical treatment while the second victim was flown to a Houston hospital.

Per Department policy, the incident is under investigation by the Texas Rangers.

SEE IT! Moment 3-Year-Old Autistic Boy Is Found ALIVE After 3 Days In The Australian Wilderness