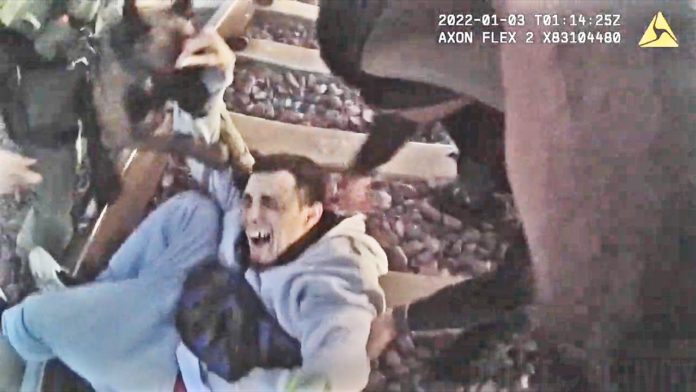 RAW VIDEO: Man Gets Shot by Fresno Police After He Stabs a Sheriff’s Office K-9

Fresno, California — On January 2, 2022, Officers assigned to the Multi-Agency Gang Enforcement Consortium (MAGEC) received information on the location of 27-year-old Gabriel Mata. That location was a home in the 5000 block of South Maple Avenue. Mata, a known gang member, was wanted for a felony domestic violence charge and had threatened to shoot the victim and Police. When Officers arrived, they discovered that Mata was no longer at the residence but had fled into a nearby field. Body-worn camera video shows the Officers arriving at the residence and requesting a K-9 to respond code 3. Officers established a perimeter around the residence and the field.

For approximately 30 minutes, Mata kept running away as Officers approached him, refusing to comply with the Officers’ attempts to get him to peacefully surrender. During this time, it was learned that Mata was armed with a knife. Officer #1 returned to his patrol car and drove by the residence. Mata had momentarily left the field and returned to the residence property where his family also urged him to surrender. Officer #1 saw that Mata was armed with a knife and returned to his patrol car to retrieve a non-lethal device (painted with yellow markings) which deploys pepper ball rounds. Mata then ran back into the field heading west towards the railroad tracks. Officers continued attempts to verbally de-escalate the situation but Mata did not comply. Officers followed Mata until he reached the railroad tracks. At this time, a Fresno County Sheriff’s Department K-9 Deputy had arrived on scene.

After multiple warnings from the Fresno County Sheriff’s Office Deputy for Mata to peacefully surrender, K-9 Cyra was deployed to assist in Mata’s apprehension. As Officers and Deputies approached to take Mata into custody, he repeatedly stabbed K-9 Cyra with his knife. The K-9 Deputy quickly approached to rescue his K-9 as Mata continued to stab his dog. Two Fresno Police Officers discharged their service weapons. When Officers #1 and #2 discharged their service weapons, K-9 Cyra disengaged from Mata but then returned and re-engaged him before the Deputy could catch his K-9 and secure the leash. Officers then handcuffed Mata, called for paramedics and began medical aid. Mata was arrested and transported to the Hospital. His injuries were not life-threatening. Mata was charged with felony domestic violence. K-9 Cyra survived his injuries and was taken to a nearby emergency veterinarian for treatment.

Nearly three weeks after the Idaho student murders shocked the college town of Moscow, investigators have backtracked on some of END_OF_DOCUMENT_TOKEN_TO_BE_REPLACED