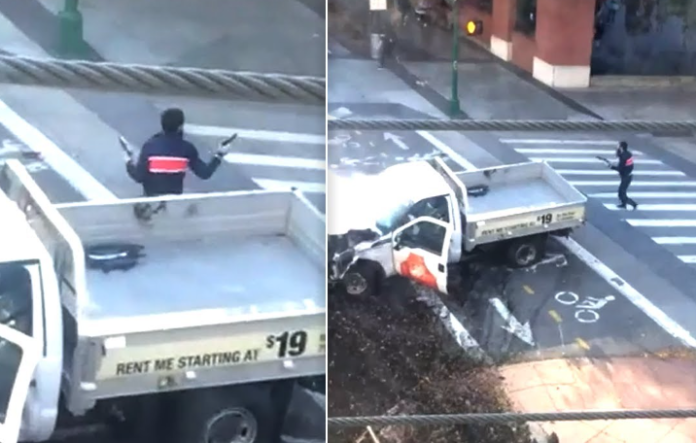 
Videos released in the federal trial of accused terrorist Sayfullo Saipov show the aftermath of the New York City bike path attack where eight people were killed on October 31, 2017.

On October 31, 2017, at approximately 3:00 p.m., Saipov drove a rented flatbed truck (the “Truck”) from New Jersey over the George Washington Bridge into New York City. After Saipov entered New York City, he proceeded in the Truck to the West Side Highway and began traveling southbound. Once Saipov was in the vicinity of Houston Street in Manhattan, he drove the Truck onto the bike lane and pedestrian walkway of the West Side Highway. Saipov then drove down the walkway for several blocks, striking numerous civilians. Saipov eventually collided with a school bus, which was carrying occupants in the vicinity of West Street and Chambers Street, at which point the Truck came to a halt.

After Saipov collided with the school bus, he exited the driver’s door of the Truck with two objects in his hands that appeared to be firearms. Moments after Saipov got out of the Truck, he yelled, in substance and in part, “Allahu Akbar,” which is an Arabic phrase that translates to “God is Great.”

Leslie Jordan’s Cause Of Death Revealed, 3 Months After He Died

A suspect was killed after being involved in two back-to-back shootouts with Arizona police on January 6 and 7. Authorities END_OF_DOCUMENT_TOKEN_TO_BE_REPLACED

A federal judge allowed a wrongful death lawsuit against Kyle Rittenhouse to proceed. Rittenhouse was found not guilty of shooting END_OF_DOCUMENT_TOKEN_TO_BE_REPLACED