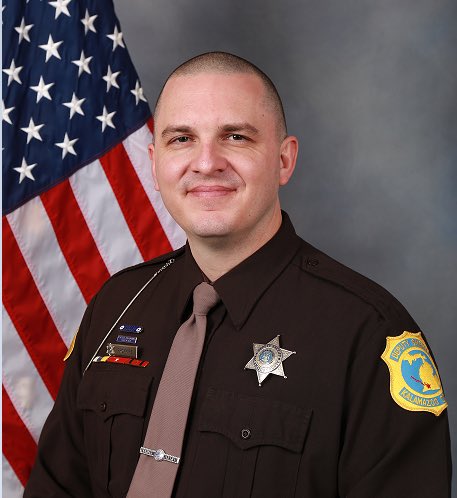 During the evening hours of Saturday, August 14, Deputies from the Kalamazoo County Sheriff’s Office made contacted with a suspect at the Shell gas station on 35th Street in Galesburg. The suspect had been involved in a pursuit early that evening with a neighboring agency. Upon contact, the suspect produced a handgun and pointed it at the Deputies. The suspect then entered a vehicle and fled southbound toward MN Avenue.

Kalamazoo County Deputies pursued the suspect vehicle in an attempt to bring the suspect into custody. During the pursuit, the suspect fired multiple rounds from his vehicle at the pursuing deputies. Deputy Proxmire was struck by the gunfire, causing the patrol vehicle to go off the road.

A passing motorist located the injured deputy, still in his patrol vehicle on the side of the road. The passing motorist called 911 and Proxmire was transported to the local hospital in critical condition.

On this episode of “Prime Crime with Jesse Weber,” he takes us through the bizarre case of Anthony Todt, a END_OF_DOCUMENT_TOKEN_TO_BE_REPLACED

Andrew Tate and his brother, Tristan, were arrested in Romania a month ago for allegations of human trafficking and organized END_OF_DOCUMENT_TOKEN_TO_BE_REPLACED