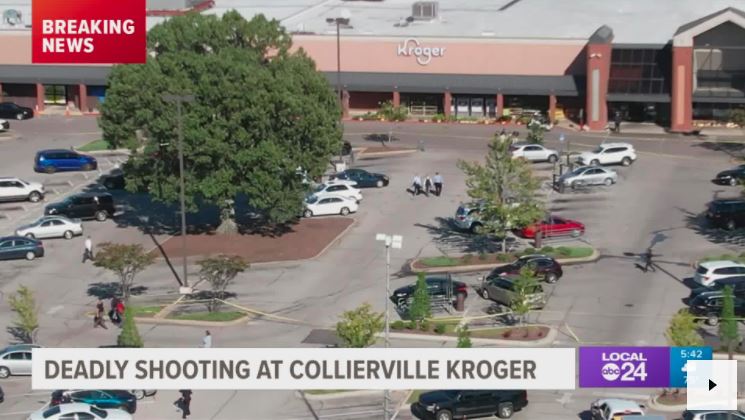 COLLIERVILLE, Tenn. — More than a dozen people were injured in a shooting at a Kroger in Collierville, Tenn. on Thursday in what the police chief said was the “the most horrific event” in the city’s history.

Here’s what we know about the shooting as of 6:30 p.m. Thursday.

How many people were killed in the Collierville Kroger shooting?

Two people were killed in the shooting, including the suspected gunman, according to Collierville Police Chief Dale Lane. The shooter died of a suspected self-inflicted gunshot wound, Lane said.

How many people were injured in the Kroger shooting?

Fourteen people were treated at area hospitals, according to Lane. Twelve were transported from the scene, while at least two were taken via private transportation.  Lane described some of the injuries as “very serious”.

Nine victims were taken to Regional One Health Medical Center in Memphis. Four of those were in critical condition as of Thursday night.

At least one of those was being treated for anxiety and not gunshot wounds at the hospital, according to Lane.

Who was the Collierville Kroger gunman?

Police have not released the shooter’s name.

Was the shooter an employee of the Kroger?

While authorities have not officially confirmed it, a police source told ABC24 reporter Brad Broders that the shooter was an employee who had recently been fired from the grocery store.

Who are the victims of the Kroger shooting?

Police have not released the identity of the victims.

What type of gun was used in the Collierville Kroger shooting?

Police have not released the type of gun used in the shooting.

What was the motive of the Kroger shooter?
Advertisement

Police have not released any information about a possible motive in the shooting. They did say that there are no known additional threats related to the shooting.

What has Kroger said about the shooting?

Kroger released a statement saying, “We are deeply saddened by the incident that occurred at our Kroger store located on New Byhalia Rd. in Collierville, TN – a suburb of Memphis. The entire Kroger family offers our thoughts, prayers and support to the individuals and families of the victims during this difficult time. We are cooperating with local law enforcement, who have secured the store and parking lot. The store will remain closed while the police investigation continues, and we have initiated counseling services for our associates. To protect the integrity of the ongoing investigation, we are referring questions to the Collierville Police Department.”

Videos of shooting happening below:

An inmate goes on a rampage when he suspects police officers lost his money. Officers have a tough time with END_OF_DOCUMENT_TOKEN_TO_BE_REPLACED

Andrew Tate and his brother, Tristan, are still being detained by Romanian authorities as they conduct their investigation into allegations END_OF_DOCUMENT_TOKEN_TO_BE_REPLACED

Prosecutors motioned the court to allow key testimony from witnesses who may have knowledge of Alex Murdaugh’s past crimes. The END_OF_DOCUMENT_TOKEN_TO_BE_REPLACED