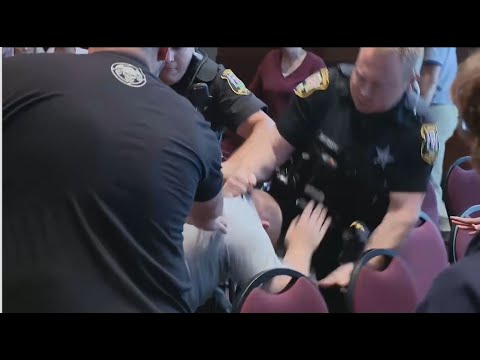 A man was tackled during a contentious Loudoun County schools board of education meeting on Tuesday afternoon.

Scott Smith was arrested at a Loudoun County, Virginia school board meeting, a meeting that was ultimately deemed an “unlawful assembly” after many attendees vocally opposed a policy on transgender students.

What people did not know is that, weeks prior, Smith says, a boy wearing a skirt, entered a girls’ bathroom at nearby Stone Bridge High School, where he sexually assaulted Smith’s ninth-grade daughter.

As a result of the viral video showing his arrest, Smith became the poster child for what the National School Boards Association has since suggested could be a form of “domestic terrorism”: a white blue-collar male who showed up to harangue obscure public servants on his local school board.

“If someone would have sat and listened for thirty seconds to what Scott had to say, they would have been mortified and heartbroken,” Lancaster said.

Minutes before Smith’s arrest at the school board meeting, the Loudoun County Public Schools (LCPS) superintendent lectured the public that concerns about the transgender policy were misplaced because the school system had no record of any assault occurring in any school bathroom.

Then a woman wearing a rainbow heart shirt – a left-wing community activist – told Smith she did not believe his daughter, he says. His rage reached a boil and he had a heated exchange of words with the woman. A police officer, there to keep the peace in the meeting, pulled on his arm. Smith yanked it away. Before he knew it, Smith says, he was hit in the face, handcuffed and dragged across the floor, with his pants pulled down. Images of the incident were splashed on televisions and newspapers across the world.

Buta Biberaj, the county’s progressive, top elected prosecutor, who has close ties to the school board’s most liberal members, appeared in court to personally prosecute Smith for disorderly conduct and resisting arrest. Biberaj ran on a platform of ending “mass incarceration,” but she wanted to put Smith in jail for the misdemeanors.

As prosecutor, Biberaj would have known about the case involving Smith’s daughter. The suspect, juvenile court prosecutors assured Smith, was being held responsible: He was on house arrest, confined to his mother’s townhouse. According to Lancaster, a conviction was expected on October 14, likely in the form of a guilty plea to a lesser sexual assault charge.

But on October 6, according to the Loudoun County Sheriff’s Office, a 15-year-old was charged with sexual battery and abduction after police said he forced a girl into an empty classroom, held her against her will, and touched her inappropriately.

Lancaster says the suspect is the same boy that allegedly attacked Smith’s daughter.

What follows, based on extensive, exclusive reporting from Loudoun County, is part of the developing story involving the Smiths and the school system.