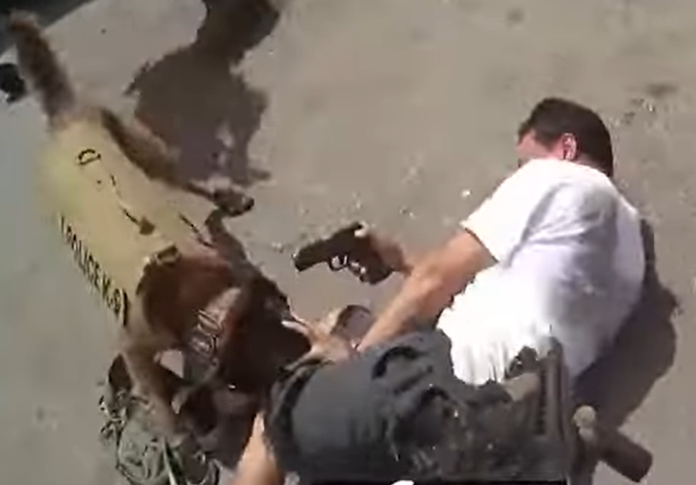 Tucson, Arizona — On August 25th, 2022, the Tucson Police Department Special Weapons and Tactics team (SWAT) were conducting surveillance on Francisco Javier Galarza, a 49-year-old male, in relation to active felony arrest warrants for home invasion and bank robbery. At approximately 11:45 a.m., a blue BMW pulled into a Circle K parking lot located at 6090 S. Park Ave. Galarza exited the vehicle and entered the convenience store. At approximately 11:51 a.m., Galarza exited the store. Officers approached and identified themselves, instructing him to get down on the ground in order to effect an arrest.

Galarza began to flee officers and removed a black handgun from a bag on his person. Ofc. Barrie Pedersen released his K-9 partner, Kiro, to apprehend Galarza. The K-9 ended the pursuit by bringing Galarza to the ground. While on the ground, he pointed a firearm at K-9 and officers. Officers Ernest Ortiz and Barrie Pedersen discharged their firearms.

Officers immediately provided medical attention to Galarza using their individual first aid kits (IFAKs) until Tucson Fire Department personnel arrived. Despite these efforts, Galarza was pronounced deceased at the scene. The handgun in Galarza’s possession was a TAURUS G3 9mm semi-automatic. It was recovered with ammunition in the magazine and one round in the chamber.

On this episode of “Prime Crime with Jesse Weber,” he takes us through the bizarre case of Anthony Todt, a END_OF_DOCUMENT_TOKEN_TO_BE_REPLACED

Andrew Tate and his brother, Tristan, were arrested in Romania a month ago for allegations of human trafficking and organized END_OF_DOCUMENT_TOKEN_TO_BE_REPLACED