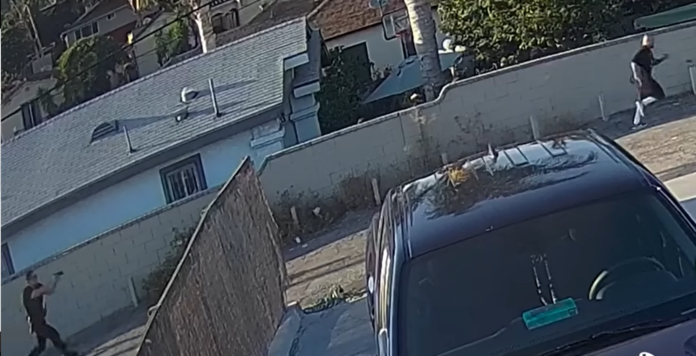 GRAPHIC: LAPD Cop Unloads on Fleeing Suspect After He Pulls Out Handgun

On July 22, 2022, around 6:50 p.m., Hollenbeck Division patrol officers were in the area of Eastern Avenue and Whiteside Street, when they saw a dark-colored sedan with no license plates. The officers followed the vehicle into a parking lot where the front passenger exited armed with a firearm. The officers pursued the man on foot into a residential neighborhood. Near the intersection of Lansdowne Avenue and Drucker Street, the man, later identified as 40-year-old Lino Soltero, pointed the firearm in the officers’ direction, resulting in an OIS. Soltero was struck by gunfire and transported to a local hospital where he was later pronounced deceased.

The loaded 9mm firearm Soltero was armed with was recovered at the scene.

No officers were injured during this incident.