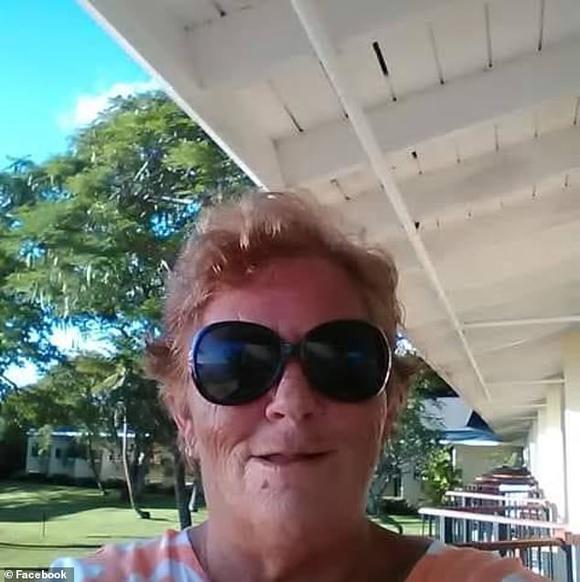 Grandmother, 61, is shot dead in front of her daughter and eight-week-old grandchild after answering a knock at the front door of her home – as cops hunt for man behind ‘targeted attack’

A grandmother has been fatally shot in the chest at close-range after answering the front door of her suburban home.

Stacey Klimovitch, 61, was shot through the screen door of her flat in the Newcastle suburb of Stockton, two hours south of Sydney, at about 8pm on Wednesday night.

The retired swimming teacher’s 31-year-old daughter and her eight-week-old granddaughter were also at the home at the time of the shocking attack.

It’s understood neither saw the shooting but heard the sound of the gunshot.

Emergency services were called to the suburban street just after 8pm, however the 61-year-old woman tragically died at the scene.

Police sectioned off Queen Street, where the pensioner lived, and the surrounding area as the killer fled the scene.

Her devastated best friend and neighbour said she had spoken to the ‘brand new’ grandmother just moments before the horrifying attack.

‘I’ve never heard a gunshot but there was no mistake what it was’, she told 9 News.

‘That’s when I heard the noise and the screaming. I tried to call her and couldn’t get her on the phone.

The woman said her best friend’s daughter had been ‘distraught’ having to care for the household dog while attending to her injured mother.

‘I’m going to miss her. Things like this shouldn’t be allowed to happen’, she said.

The 61-year-old is survived by three daughters and an autistic son, who requires full-time care.

Other local residents said more than a dozen police officers attended the scene with sniffer dogs, while a helicopter flew overhead.

The hunt for the grandmother’s killer is underway, with specialist forensic police scouring the woman’s property and the wider Hunter region for clues.

Detectives believe they know the identity of the person they are looking for, with the alleged shooter said to be a younger man known to the family.

‘An innocent person has answered the front door of a home and she’s been shot in the chest and killed in the presence of a relative and a child’, he said.

‘It doesn’t get any worse.’

Mr Humphrey said he was convinced the attack was targeted, but said the alleged shooter’s motives were still unknown.

‘We have a number of lines of enquiry’, he said.

Ms Klimovitch was a well-known figure in the tight-knit community and was involved in the swimming scene.

‘Stacey had such a soft heart and she just cared about everyone,’ one friend told the Newcastle Herald.

‘She probably taught every second kid in Stockton to swim. She was really proud of that. It’s an absolute tragedy, she would not have hurt a fly.’

NSW Police have urged anyone who was in the surrounding area and may have CCTV or dashcam footage to contact police. 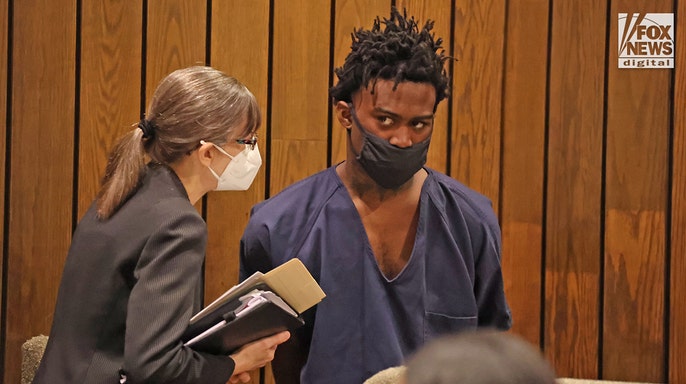 The Memphis man accused of gunning down a friend and six innocent people in and around the city last week returned to court for a brief motion hearing on Tuesday.

Ezekiel Kelley wore a dark-colored jail issue jumpsuit and a face mask in court on Tuesday, where he appeared briefly before Judge Karen Massey. Massey has signed an order limiting extrajudicial statements, meaning statements made outside the courtroom, and ordered the murder suspect back in court on Friday morning.

Kelly, 19, allegedly shot Dewayne Tunstall in the head in another friend’s driveway early Wednesday before embarking on a string of shootings hours later which left another three dead and three wounded.

Neighbors told Fox News Digital last week that Tunstall was a childhood friend of the suspect, and authorities did not immediately reveal a motive for the slaying.

Photos taken by Fox News Digital show bullet holes in the side of the house and a bloodstain on the asphalt. At least one shot went through what appears to be a child’s bedroom window with toys on the sill.

The other victims appear to have been chosen at random, as Kelly allegedly drove around town, terrorizing the community with gunfire and carjackings.

Kelly, who was previously charged with two counts of attempted murder and another of reckless endangerment for a 2020 shooting, pleaded guilty to a reduced charge of aggravated assault and served just 11 months of a three-year sentence in a county detention center.

Two of the three victims in the 2020 attack declined to comment. The third could not immediately be reached.

The Shelby County Division of Corrections did not immediately respond to Fox News Digital’s requests for comment on the circumstances of his release.

Bullet hole in the window of the home where Ezekiel Kelly is alleged to have shot Dewayne Tunstall in Memphis, Tennessee. Photo taken, September 8, 2022.

Kelly’s public defender, Jennifer Case, asked the court for a gag order last week and to rule on any potential conflicts of interest. The motion hearing was scheduled for 9 a.m. CT Tuesday.

Police halted Wednesday’s carnage around 9 p.m., disabling a stolen car with a spike strip and taking Kelly into custody near the intersection of Ivan and Hodge Roads. He smiled in his mugshot.

Shelby County District Attorney Steve Mulroy addresses the media after Ezekiel Kelly’s appearance in Shelby County court in Memphis, Tennessee on September 9, 2022. Kelly is alleged to have killed four people and injured more as he drove around Memphis firing at will and carjacking numerous people too.

The suspect allegedly livestreamed portions of the attacks on Facebook, including the shooting of an unsuspecting shopper at an AutoZone store on Jackson Avenue.

A judge informed Kelly last week that he could face the death penalty under Tennessee law if convicted of first-degree murder, and Shelby County District Attorney General Steve Mulroy said that additional charges were likely. 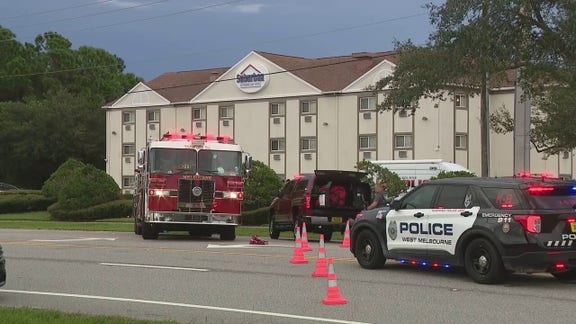 A Florida man told police he shot at them because he thought they were members of a Mexican drug cartel, according to an arrest affidavit. He is now facing premeditated murder charges.

Lukas Alves is facing a slew of charges, including attempted first-degree premeditated murder of a law enforcement officer after he allegedly shot an officer in the chest at a Melbourne hotel Friday, FOX 35 Orlando reports.

While being questioned by officers after the shooting, Alves said that he believed the officers were members of the Mexican Cartel who showed up outside his room to steal his belongings.

“Alves and his roommate were staying at the Suburban Lodge Extended Stay when hotel management was alerted about a 911 hang-up call. When management knocked on Alves’ door they overheard the man yell, ‘There are a bunch of armed gunmen, and I’m going to die,’ an arrest affidavit states,” FOX 35 states.

A Florida man accused of shooting at police, and striking one officer in the chest tells law enforcement he thought they were members of the “Mexican Cartel.”

Police were alerted to the verbal exchange and told the TV station they arrived at the hotel to check the roommates’ well-being.

When officers knocked on Alves’ room door, he repeatedly asked for their badge numbers several times. Police said they complied and gave them to him.

Alves then began to count down from three, then fired one shot through the door with his gun, striking an officer in the chest.

An exchange of gunfire then took place between officers and Alves. Some of Alves’ rounds reportedly went through the walls of another room where two people were staying.

Scene outside a Melbourne, Florida, hotel where an officer was shot in the chest Sept. 9, 2022.

Alves and his roommate were then taken into custody, police said. The officer is expected to recover.

Alves is facing three counts of attempted first-degree premeditated murder of a law enforcement officer, one count of shooting into an occupied building and use of a firearm during a felony, FOX 35 says.

The officer shot was wearing a bulletproof vest and only suffered bruising and a small laceration on his chin.

“The vest did its job,” Melbourne Police Chief David Gillespie said. He added that Friday also marked the officer’s 26th anniversary with the agency. “Thank god he’s going to live to see another day,” he added. 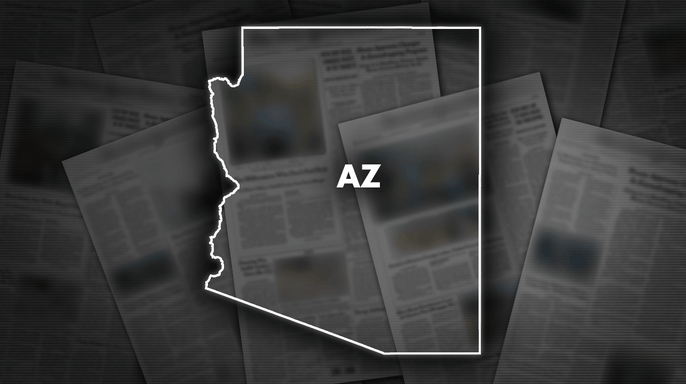 Police in Las Vegas say a person was killed and a patrol officer was wounded in an exchange of gunfire during a foot chase following a vehicle stop early Saturday several blocks east of the Strip.

Capt. Carlos Hank said the officer was taken to University Medical Center in stable conditi on after the shooting about 1:15 a.m. near Flamingo Center and University Center Drive.

In a video statement, Hank said one person ran from an SUV that had been stopped by police, and both the officer and suspect were shot during an exchange of gunfire.

The suspect was pronounced dead at Sunrise Hospital and Medical Center, Hank said.

The shooting was the eighth involving Las Vegas police in 2022, Hank said.