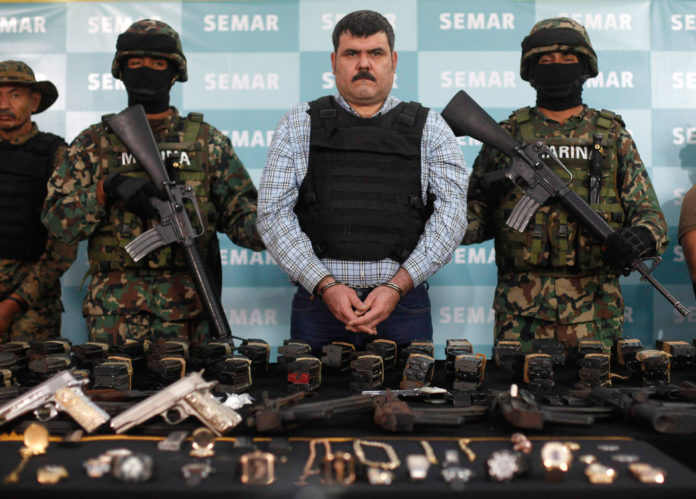 
BROWNSVILLE, Texas – A 51-year-old Mexican national who was head of Cartel del Golfo (CDG) from 2003 to 2012 has been ordered to prison and to pay millions for his role in conspiring to distribute cocaine and marijuana from Mexico into the United States, announced U.S. Attorney Jennifer B. Lowery.

Today, U.S. District Judge Fernando Rodriguez Jr. ordered Costilla-Sanchez to serve the rest of his life in federal prison. At the hearing, the court heard additional information detailing how Costilla-Sanchez profited $5 million from drug trafficking. He was ordered to pay a money judgment in that amount. In handing down the sentence, Judge Rodriguez noted Costilla-Sanchez’s extensive involvement in trafficking illegal drugs into the country. The court commented that during the 10 years Costilla-Sanchez was the head of the CDG, he lead a violent criminal organization, using guns and intimidation to maintain control of their illegal drug trafficking enterprise and resorting to violence and killing to maintain power.

“This was a long, but very important case to the district and especially our partners in Brownsville,” said Lowery. “The life sentence speaks for itself. Justice has now been served.”

“Today’s sentencing is the culmination of years of relentless work by Homeland Security Investigations (HSI) and its partners targeting the Cartel del Gulfo,” said Acting Special Agent in Charge Craig Larrabee of HSI – San Antonio. “This investigation highlights HSI’s dedication to go after cartel members importing dangerous drugs into our communities. This sentence will send a resounding message that transnational criminal organizations are being continuously investigated and their leaders will be brought to justice.”

“High-ranking drug trafficking leaders like Costilla-Sanchez are not immune from facing stiff punishments,” said Special Agent in Charge Daniel C. Comeaux of the Drug Enforcement Administration (DEA) – Houston Division. “Costilla-Sanchez brought poison to our communities, and our collaborative efforts with our local and federal partners brought him to prison. We will continue to aggressively go after any drug trafficking organization wanting to profit from our communities.”

“This sentencing sends a clear message that organized drug trafficking organizations and threats against law enforcement will not be tolerated,” said FBI Special Agent in Charge Oliver E. Rich Jr. “The FBI continues to work alongside our partners to pursue and prosecute the leadership of drug trafficking cartels and dismantle their organizations. We thank the Organized Crime Drug Enforcement Task Force (OCDETF) for their collective efforts to bring this high-level criminal to justice.”

Costilla-Sanchez aka El Cos, Doble X and Dos Equis became head of CDG after the arrest of former CDG leader Osiel Cardenas in 2003. Prior to joining the cartel, Costilla-Sanchez was a municipal police officer in Matamoros, Tamaulipas, Mexico.

He was arrested in 2012 in Mexico at the request of the United States and in 2015. Costilla-Sanchez also previously pleaded guilty to threatening two federal agents from the FBI and while he was being investigated for drug trafficking in 1999.

CDG is a Mexican transnational criminal organization operating in Tamaulipas, Mexico. During the time Costilla-Sanchez was the leader, he was responsible for importing over 10,000 kilograms of cocaine and 140,000 kilograms of marijuana to the United States.

Costilla-Sanchez will remain in custody pending transfer to a U.S. Bureau of Prisons facility to be determined in the near future.

HSI, DEA and FBI conducted the OCDETF operation with the assistance of the U.S. Marshals Service and IRS-Criminal Investigation.

Anne Schwartz, the reporter who first broke the Jeffrey Dahmer story and author of “Monster: The True Story of the END_OF_DOCUMENT_TOKEN_TO_BE_REPLACED