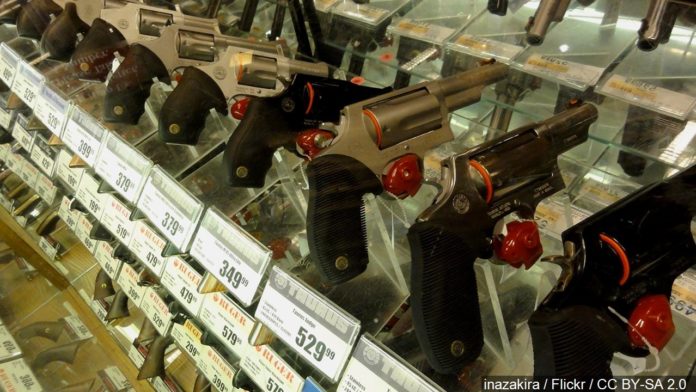 
ATLANTA – Dawuan Na’jee Williams has been indicted on federal charges of making false statements to federally licensed firearms dealers, aggravated identity theft, and possession of firearms by a convicted felon.

“Convicted felons are prohibited from legally possessing and purchasing firearms under any circumstance,” said Acting U.S. Attorney Kurt R. Erskine. “Criminals who try to circumvent these restrictions by stealing and using the identities of law-abiding citizens will be prosecuted.”

“It is illegal for any convicted felon to possess a firearm,” said L. C. Cheeks Jr, Acting ATF Atlanta Special Agent in Charge. “These illegally purchased firearms will more than often be used in violent crimes and it is these types of guns that we need to get off our streets. ATF will continue to work with our Federal and State partners to improve safety in each and every community we serve.”

According to Acting U.S. Attorney Erskine, the charges, and other information presented in court: Dawuan Williams allegedly used a fraudulently obtained identification card bearing his photograph, but the name and date of birth of another person, to purchase dozens of firearms and large-capacity ammunition magazines in the metro Atlanta and North Georgia are as. Williams could not lawfully purchase the guns because he had been convicted previously of numerous felonies, including burglary, robbery, terroristic threats, kidnapping, aggravated battery, and criminal use of personal identification information.

In July 2021, police officers recovered a second semiautomatic pistol from the scene of a shooting in Tallahassee, Florida. Federal agents traced this firearm to a Georgia purchase made with Williams’s identification card. A cellular telephone video taken around the time of the Florida shooting depicted the alleged shooter as a man of Williams’s race and complexion wearing a distinctive red baseball cap and red Gucci belt.

On July 20, 2021, federal agents searched a Jonesboro, Georgia, residence where Williams rented a room. In one of the bedrooms, agents recovered four firearms that had been purchased with Williams’s fake ID, empty firearm boxes for other firearms purchased with that ID, a red baseball cap, and a red Gucci belt. Williams was arrested that same day.

Dawuan Na’jee Williams, 39, of Jonesboro, Georgia. and Tallahassee, Florida, was arraigned before U.S. Magistrate Judge John K. Larkins III. He was indicted by a federal grand jury on August 17, 2021. He was arraigned August 26. 2021. Members of the public are reminded that the indictment only contains charges. The defendant is presumed innocent of the charges and it will be the government’s burden to prove the defendant’s guilt beyond a reasonable doubt at trial.

‘We took off with 270 children, and we landed with 271.’ US Troops Helped To Deliver Afghan Baby Aboard Evacuation Flight

A suspect was killed after being involved in two back-to-back shootouts with Arizona police on January 6 and 7. Authorities END_OF_DOCUMENT_TOKEN_TO_BE_REPLACED

A federal judge allowed a wrongful death lawsuit against Kyle Rittenhouse to proceed. Rittenhouse was found not guilty of shooting END_OF_DOCUMENT_TOKEN_TO_BE_REPLACED