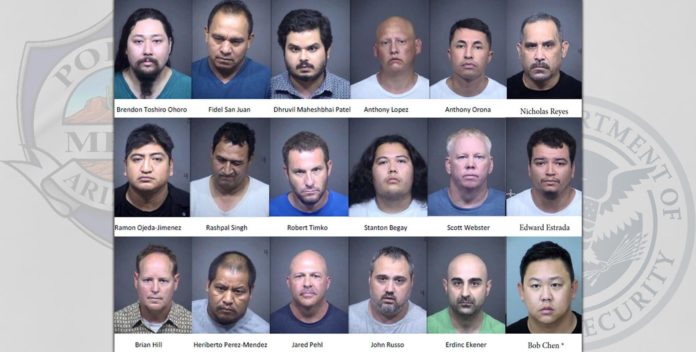 The operation was led by the Mesa Police Department. The Arizona Attorney General’s Office and the Scottsdale and Tempe Police departments also participated in the investigation.

On Aug. 5 and Aug. 6, law enforcement staged in the area of South Country Club Drive and US 60 in Mesa, Arizona, to conduct online chats that offered prostitution services in an effort to identify and apprehend customers of sex trafficking victims. All 18 men arrested over the two days solicitated adult prostitution, and one was also charged of attempted sex conduct with a minor, child prostitution with a minor under the age of 15, money laundering and prostitution.

HSI encourages the public to report suspected child predators and any suspicious activity through its toll-free Tip Line at 1-866-DHS-2-ICE or by completing its online tip form. Both are staffed around the clock by investigators. From outside the U.S. and Canada, callers should dial 802-872-6199. Hearing impaired users can call TTY 802-872-6196.

Alex Murdaugh apparently met with his lawyer, law partners, and relatives for a meeting three days after the murders of END_OF_DOCUMENT_TOKEN_TO_BE_REPLACED